I offer half and full day driver-guided tours around London, covering a range of attractions, museums and more! The most popular locations are included in the Half Day Essential Tour and the Full Day Highlights Tour, however I can customise the itinerary to meet your needs! Here are some ideas of other places you may want to visit!

Half Day Essential Tour (up to 4 hours) 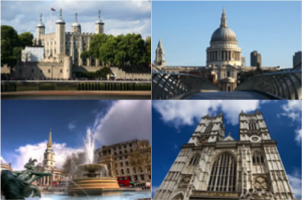 The essential tour! See the most important landmarks that every visitor has to see even on the briefest of visits. Westminster Abbey, the Houses of Parliament, Trafalgar Square, Buckingham Palace, the Changing of the Guard, the Tower of London, the London Eye, just to name a few. And of course Harrods, this most famous of shops. This tour allows you to visit one of the Abbey or the Tower in greater depth. Not to be missed on any visit to London! 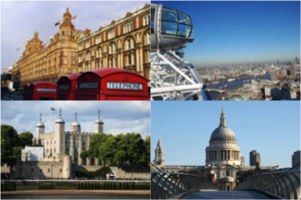 Whether you are a first time visitor or returning to London, this is a comprehensive tour of the capital, including Westminster Abbey, the Houses of Parliament, Trafalgar Square, Buckingham Palace, the Changing of the Guard, the Tower of London with the Crown Jewels, the London Eye, Harrods, and famous museums, including the National Gallery, the British Museum, Tate Modern. This tour includes a visit inside both Westminster Abbey and the Tower of London. Alternatively, if you wish, you could replace either of these with a highlight tour of one of the museums.

The official residence of the Queen, her presence is shown by the flying of the Royal Standard. Queen Victoria was the first monarch to live here, but the history of the house goes back to the 18th century. It is used for ceremonial state occasions for visiting heads of state, and if you come in August or September, you can visit inside. The Changing of the Guard takes place in the courtyard.

Harrods: With some 300 departments, 4000 staff and the spectacular Edwardian food hall lavishly decorated by Mohamed Al Fayed, it is a definite shopping heaven and a must for every visitor! (Hard to believe that it started as a small grocery shop!)

Houses of Parliament – Big Ben: Once the royal Palace of Westminster, it has been the seat of the two Houses of Parliament since the 16th century when Henry VIII moved out, because he preferred Whitehall Palace. In 1834 the old palace was destroyed by fire with only the 12th century Westminster Hall surviving. The present Neo-Gothic building is a masterpiece of 19th century architecture with the clock tower of Big Ben being one of the most recognisable landmarks of London.

Kensington Palace : The childhood home of Queen Victoria, Britain’s longest reigning monarch, Kensington Palace was also the home of Diana, Princess of Wales. Parts of the palace are still home to some members of the royal family, but the State Apartments are open to the public.

London Eye: The tallest observation wheel in the world was installed to mark the Millennium and you get breathtaking views from one of its capsules. Take a ride of approximately 30 minutes and see a panoramic view of all the sights you’ve visited at ground level from the dizzying height of 135 metres.

Oxford Street: This most famous of shopping streets, it leads right across from Hyde Park to practically the British Museum. High street shopping at its most exhausting!

Piccadilly Circus: One of the best recognised squares of London with its huge neon advertising boards. The fountain under the sculpture of Eros is a universal meeting point, and the streets leading off it radiate to all the different parts of London.

Royal Albert Hall: Modelled on a Roman amphitheatre this is London’s premier concert hall. Inaugurated by Queen Victoria, it hosts a huge array of musical events, ranging from opera to pop concerts. Opposite you can see the Albert Memorial, a gilded statue of Queen Victoria’s husband, Prince Albert.

South Kensington: Home to numerous museums, like the Science Museum, the Natural History Museum and the Victoria and Albert Museum, this area has a definite feel of culture about it. The big museums are all free of charge and are well worth a visit.

St Paul’s Cathedral: Another of London’s famous landmarks, this is the architect Sir Christopher Wren’s masterpiece of Baroque architecture. This grand cathedral, the second largest in the world after St Peter’s in Rome, has become the setting of many great ceremonial events, including the wedding of Prince Charles and Lady Diana Spencer in 1981.

Tower of London: Imprisonment, torture and execution – undoubtedly one of the famous roles of the Tower! Many traitors were imprisoned here, and two of Henry VIII’s six wives were beheaded. Begun by William the Conqueror, it has been remodelled and renovated over the centuries and now houses the famous Crown Jewels. The Sceptre has the world’s largest clear diamond with a weight of 530 carats, and the Imperial State Crown is still worn by the Queen for the ceremonial opening of Parliament. The Beefeaters in their red uniforms look after the Tower and the celebrated ravens make sure that the monarchy survives.

Trafalgar Square: One of London’s most famous squares, it was built to celebrate the naval victory at the battle of Trafalgar against Napoleon in 1805. Admiral Nelson’s column is surrounded by huge lions symbolising Britain’s power at the time. The square is flanked by the National Gallery from the north side and on the south leads onto Whitehall and Parliament Square.

Westminster Abbey: The setting for coronations and many royal weddings, the resting place of many English kings and queens, the Abbey is one of the major landmarks of London. The glorious medieval architecture, especially the intricate detail of the Henry VII chapel makes this a most memorable visit. It is half church, half national museum with the amazing collection of tombs and monuments to some of England’s greatest public figures, including politicians, artists, writers, poets, musicians.

For information on prices for half and full day London tours, please see the PRICES page.